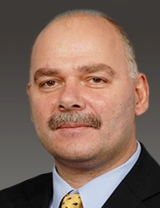 Andy Augousti is a professor of Applied Physics and Instrumentation, and was the founding Director of the Doctoral School of the Faculty of Science, Engineering and Computing at Kingston University. He published nearly 150 refereed journal and conference publications, 3 patents, 5 volumes of edited conference proceedings, and a laboratory manual for Physics students with international colleagues. He is also a Series Editor for a book series on Sensors and Instrumentation published by Kluwer Academic Publishers.

He organized over 50 conferences and meetings, chaired four national conferences, and organized and delivered over 50 short courses in the UK, France and China. He has international research links in China, India, Ireland, Poland, the USA, Japan and Brazil and the work has been funded by the EPSRC, the former DTI, the EU, the British Council, the Royal Society and the Royal Academy of Engineering. He is a Chartered Physicist, a Chartered Engineer, a Fellow of the Institute of Physics, the Institute of Engineering and Technology and the Institute of Measurement and Control. He have been a recipient of the President's Award of Tianjin University, and both the Honeywell International Medal and the Callendar Medal of the Institute of Measurement and Control.